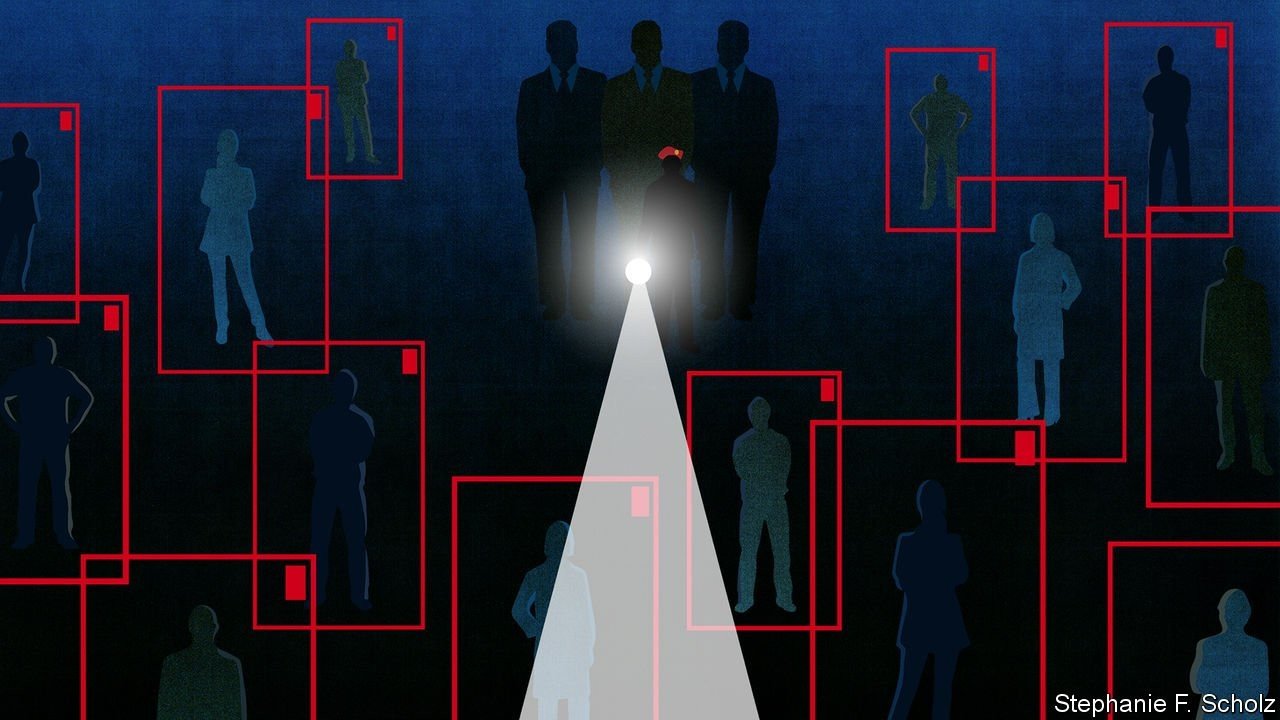 ALI AHMAD, a British security guard, was arrested while on holiday in the United Arab Emirates (UAE) in 2019. He had attended a football match, and was wearing a Qatari team shirt. He had no idea that the UAE was in the midst of a blazing diplomatic row with Qatar. He was arrested, beaten, electrocuted, stabbed and deprived of sleep, he says. He was eventually released, but still suffers flashbacks.

Justice in the UAE can be both arbitrary and rough. So human-rights activists were appalled to discover, on November 25th, that an Emirati official had been elected president of Interpol, the global police agency. Ahmed Naser al-Raisi was not just inspector-general of the UAE’s interior ministry at the time of Mr Ahmad’s ordeal; he is accused of complicity in it and in other abuse, all of which the UAE denies. Meanwhile, Hu Binchen, an official from China’s ministry of public security, was elected to Interpol’s executive committee.

Interpol is the world’s largest police organisation. But it has no agents of its own, nor does it conduct its own investigations. Its role is to help law-enforcement agencies track down fugitives and share information. It also co-ordinates cross-border operations, such as one this year involving specialised police units in 20 countries, from Cambodia to Ireland. It targeted illegal gambling and investment fraud and achieved more than 1,000 arrests.

Interpol helps to investigate human trafficking, child sex abuse and modern slavery, and is increasingly involved in fighting terrorism, too. It runs a vast database of stolen passports, which are often used by criminals to cross borders. Its importance has grown as organised crime has become more globalised. “Police chiefs from around the world are telling me that…80% or 90% of their investigations into organised crime nowadays have an international dimension,” says its secretary-general, Jürgen Stock, a former vice-president of the German federal police.

Over the past few years, however, fears have spread that Interpol has come under the influence of repressive governments. Countries like Russia, China and Turkey have sent the body “red notice” requests for the arrest of large numbers of people, including critics and refugees. They have also managed to have their officials elected to top jobs. In 2016, Interpol chose a Chinese security official, Meng Hongwei, as its president. Two years later, after Mr Meng was detained during a trip home, Russia came close to having an ally of Vladimir Putin elected as his successor. Mr Raisi’s home, the UAE, is a monarchy with a poor human-rights record whose courts submit to unelected leaders.

His elevation to the top job has revived concerns about the long arm of authoritarian regimes. Mr Raisi faces criminal complaints, based on claims of involvement in torture and arbitrary detention, in at least five countries, including France, where Interpol is based in the city of Lyon. The UAE has denied the allegations. Its media, which are tightly controlled, have carried no mention of them. In private, officials dismiss them as a “smear campaign”.

The Interpol president’s scope for influencing the organisation is limited. His job is unpaid and part-time, and is not as important as that of the agency’s secretary-general, Mr Stock. The president’s most visible role is to chair the organisation’s annual general assemblies. But he also chairs the three annual meetings of Interpol’s executive committee, which oversees the work of its general secretariat. Insiders say the fact that a Chinese official held the presidency for two years did not affect the agency’s operations. But it was not for lack of trying. Mr Meng sought to take on additional powers, they say, but faced pushback from bureaucrats.

The damage to Interpol’s brand has real-world consequences, however. “If your reputation is bad, you will lose trust, and without trust you cannot have co-operation,” says Sarka Havrankova, the agency’s vice-president for Europe, who ran against Mr Raisi. The risk, she says, is that national police agencies will look for other ways to co-operate, such as through Europol, a regional grouping, undermining the international policing system. “You need to have a global network,” says a former Interpol official, “because you never know where criminals will go.”

Interpol’s reputation was already fraying. Mr Meng, the first Chinese national to be elected president, was sentenced to 13-and-a-half years in jail in 2020 after pleading guilty to bribery. His wife says the charges against him were politically motivated. Years earlier, Jackie Selebi, a South African police commissioner and Interpol’s first African leader, was convicted of taking bribes from a drug-trafficker. More recently, a Chilean official elected to the executive committee in 2019 was placed under house arrest in Santiago over claims he embezzled $146m in public funds.

Attempts by authoritarian governments to use Interpol to hound or detain opponents abroad also cast a cloud over the agency. Russia has been the most serious offender, accounting for nearly 43% of all public red notices. (Only 7,500 of the 66,000 red notices in circulation today are made public. The rest are available only to law-enforcement officials.) Of these, many are for Russian Muslims accused of terror offences. Some are guilty of nothing more than wiring money abroad to friends or relatives whom Russia has designated as terrorists, says Alexei Obolenets, a lawyer.

Russia has also repeatedly asked Interpol to issue red notices against Kremlin critics, including Bill Browder, a British financier, and Mikhail Khodorkovsky, a former oligarch. It almost got Mr Browder extradited in 2018 when Spanish police arrested him in Madrid, but he was soon released. (Interpol says he was never issued a red notice, though in 2017 he was briefly the subject of another type of Interpol alert.) Interpol has also declined Russian requests to place Mr Khodorkovsky, who lives in exile in London, on its wanted list.

Turkey, which hosted this year’s Interpol assembly, has also been trying. The country flooded Interpol with red-notice requests against exiled members of the Gulen movement, a secretive Islamic group blamed for a violent coup attempt in 2016. (Tens of thousands of Gulenists, including teachers, lawyers and charity workers, have been arrested in Turkey.) The agency recently acknowledged it had rejected almost 800 Turkish requests. At one point Turkish officials reportedly attempted (and failed) to upload the names of 60,000 people onto the agency’s database. Undeterred, Turkish agents have turned to kidnapping Gulen sympathisers abroad and spiriting them back to Turkey. Freedom House, an American watchdog, lists at least 58 such renditions from 17 countries.

China, too, is a repeat offender. In 2006 Huseyin Celil, a Uyghur who had fled to Canada, was arrested in Uzbekistan on an Interpol warrant and delivered to China, where he remains in prison on dubious terror charges. In July Idris Hasan, a Uyghur living in Turkey, was detained in Morocco on the basis of a red notice.

Safeguard Defenders, a civil-rights group, says China’s use of red notices for critics and corruption suspects appears to have increased dramatically under President Xi Jinping. In many cases Interpol has stood its ground. The red notice for Mr Hasan was suspended in August, though he continues to fight extradition. China had probably hoped that Mr Meng, who was head of Interpol at the time, would keep such red notices in place, and help reel in more dissidents. Mr Meng’s failure to please his bosses in Beijing may have contributed to his own fall from grace.

The UAE has followed the same game plan. Several foreigners who helped Princess Latifa, the daughter of Dubai’s ruler, try to escape house arrest imposed by her father in 2018, say they were subsequently the subject of Interpol red notices, which were later withdrawn.

Interpol has made some reforms, notably to the process of vetting red-notice requests. Such notices can no longer be issued against people whom a member-state has recognised as refugees. At its meeting in Istanbul, the organisation also beefed up eligibility criteria for candidates to its executive committee. But elections to Interpol’s top post continue to be opaque. Candidates for the presidency are not formally announced until the start of the general assembly, which ensures they cannot be properly assessed by delegates or the wider public. Voting is by secret ballot, which makes backroom deals inevitable.

China is known to use promises of investment and aid to get its candidates elected to posts in international bodies. The UAE is suspected of having done so to drum up votes for Mr Raisi. Over the summer he toured Africa, meeting the presidents of Burkina Faso, the Gambia, Guinea, Guinea-Bissau and Senegal, and publicly promising them support.

Interpol is poorly funded for an agency with such broad and complex responsibilities. Its budget for this year is a mere €145m ($164m), of which €62m comes from statutory contributions (America, Germany and Japan give the most). In the past, Interpol entered into commercial deals to make up for a shortfall. In 2015, it was forced to suspend a €20m partnership with FIFA, the scandal-plagued global body that governs football. It was related to, of all things, fighting corruption. Three years before that, it accepted a €15m grant from Philip Morris, a tobacco company, to help fight fake cigarettes. Interpol has since weaned itself off private-sector money. Delegates in Istanbul voted to increase its budget by about 15% in real terms over the next three years.

But the funding remains inadequate, say experts, especially given the increasing workload. Interpol issued fewer than 1,500 red notices in 2001. Last year, it issued 11,000. “The numbers suggest there is not enough capacity,” says Bruno Min of Fair Trials, another watchdog. The agency does not publish data on rejected red-notice requests. “We don’t have any idea whether these systems of screening [requests] are actually working,” says Mr Min.

The organisation is dogged by claims that authoritarian countries trade contributions for influence. In 2017, the UAE pledged €50m to Interpol’s Foundation for a Safer World, one of the biggest donations in the agency’s history. A report by Sir David Calvert-Smith, a retired British high-court judge, concluded that the UAE “is seeking to improperly influence Interpol through funding and other mechanisms”. Interpol has rejected such claims and publicly welcomed the donation.

But similar concerns are also coming from inside the organisation. “Let us show the world that Interpol is not for sale,” Ms Havrankova told the group’s assembly on the day of the presidential vote, in a thinly veiled reference to the UAE’s lobbying efforts. Some may have already reached a different conclusion. ■