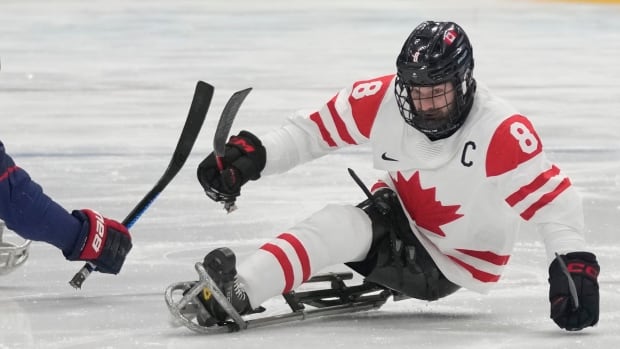 Canada reached the final of the International Para Hockey Cup with a 4-1 semifinal win over the host Czechs on Wednesday.

The Canadians will face the United States for gold Friday in a rematch of February’s Paralympic final in Beijing where the Americans blanked Canada 5-0 for the title.

“You have to almost play a perfect game versus the Americans,” Canadian coach Russ Herrington said.

“You can’t make too many turnovers at either blue-line, we can’t be handing them free offensive looks and power plays all night and if we get an opportunity, we have to make it count.”

Captain Tyler McGregor had a goal and two assists and Dominic Cozzolino scored twice for Canada against the Czechs at Torax Arena in Ostrava.

The Canadians outshot Czechia, the country commonly known as the Czech Republic, 21-7.

Corbyn Smith contributed a goal and an assist and James Dunn and Liam Hickey each a pair of assists to the victory.

“This is an excited room,” Dunn said. “We have a lot of guys playing in their first tournament, so for them to play for gold is a great experience and a real honour.

“For us now, we have to remain focused and not stray away from our game.”

Goaltender Jean-Francois Huneault made six saves for the win.

“When we talked before the game, it was nothing about Czechia,” Smith said.

“It was all about us and what we needed to do. We wanted to play hard, be physical and force them to play our game. I think we did a good job of getting back to our game and it worked out well tonight.”