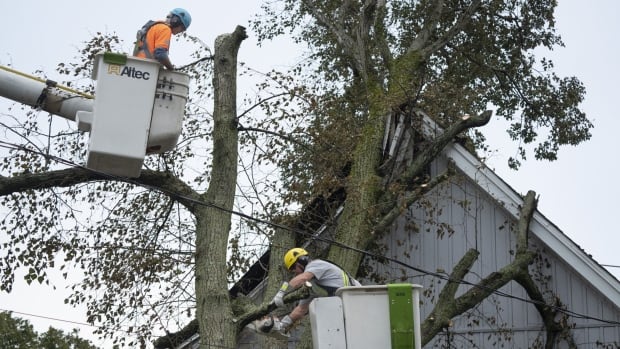 Hurricane Fiona is well on its way to being the costliest storm to ever hit Atlantic Canada — and most of its financial toll won’t be covered by insurance.

Analysts at DBRS Morningstar estimate that the storm, which ripped through Nova Scotia, New Brunswick, Prince Edward Island, Newfoundland and Eastern Quebec last weekend, caused between $300 million and $700 million worth of insured losses to the local economy.

But that figure is nowhere close to the true cost of the storm, because gaps in the insurance system make it so that most of the damage won’t be covered.

While most residential home and property insurance policies typically cover damages from things like strong winds, downed trees and water damage caused from leaky roofs, that isn’t the case for the type of flooding caused by storm surges — which were a huge part of Fiona’s wrath

“Sea surge is not covered in most cases,” said Marcos Alvarez, the global head of insurance with DBRS Morningstar. “You buy that coverage separately in most of your policies in Canada.”

Most people who need it don’t have it, however, because it’s hard to get and often prohibitively expensive.

That’s the situation for David Farrell, a homeowner from Rose Blanche-Harbour le Cou, N.L., who was inside his seaside home when the storm ripped through, leaving it damaged beyond repair.

“I don’t have any insurance,” he told CBC News of his home of 15 years. “When I bought the place, the home inspector said, ‘You live over salt water … you can’t get any.'”

Christopher Farrell describes the moment he saw water coming in from under the floor of their house in Rose Blanche-Harbour le Cou, N.L. when Fiona passed through.

He isn’t alone in his predicament. While the impact of the storm has been devastating to the local community, Alvarez says it pales in comparison to the financial toll of other natural disasters, such as the wildfire that razed much of Fort McMurray in 2017, and the ice storm that hit Ontario and Quebec in 1998, calamities for which the insurance bill was counted in the billions.

While homeowners are likely to discover that most flood damage isn’t covered, businesses in the region will probably be in better shape from an insurance perspective.

“Commercial customers will be more likely to have flood insurance in place,” Alvarez said. “It’s not only the damage that you will see being covered by insurance … but also business interruption losses — if they cannot operate or they cannot have access to property for a certain number of days, that will also be covered.”

While the industry is trying to adapt to meet the needs of the region, its clear the economics are changing quicky. “While this storm alone is not enough to say climate change is worsening Atlantic Canada’s risk exposure to major storms, insurers are likely to be more cautious in the future when modeling catastrophe risk in that region,” Alvarez said.

“The labour shortage and inflation have increased the cost of rebuilding damaged property, which will lead to higher insurance claims. Together, these factors will require insurers to raise premiums to maintain their profit margins in the future.”

Much of the damage won’t be covered by insurance policies, federal government programs will be there to fill in some of those gaps. But exactly how much is unclear.

“These kinds of events sadly are going to be more frequent and more destructive,” Dominic LeBlanc, the federal Minister of Intergovernmental Affairs, Infrastructure and Communities, told reporters on Tuesday. “Obviously the government of Canada will be there to share the financial aspect of that compensation.”

Gloria Haydock, manager for consumer relations for the Atlantic Region with the Insurance Bureau of Canada, says many in the area are struggling right now for reasons beyond the property damage.

“A roof is a roof, but it’s everything inside … the memories and photographs and everything else,” she told CBC News in an interview. “It’s a difficult time to get through, especially when you look around and you see the devastation.”

That’s why even though his home may prove to be uninhabitable, Farrell counts himself among the lucky ones.

“Other poor people are getting nothing,” he said. “At least I’m lucky enough to get my belongings and personal stuff.”