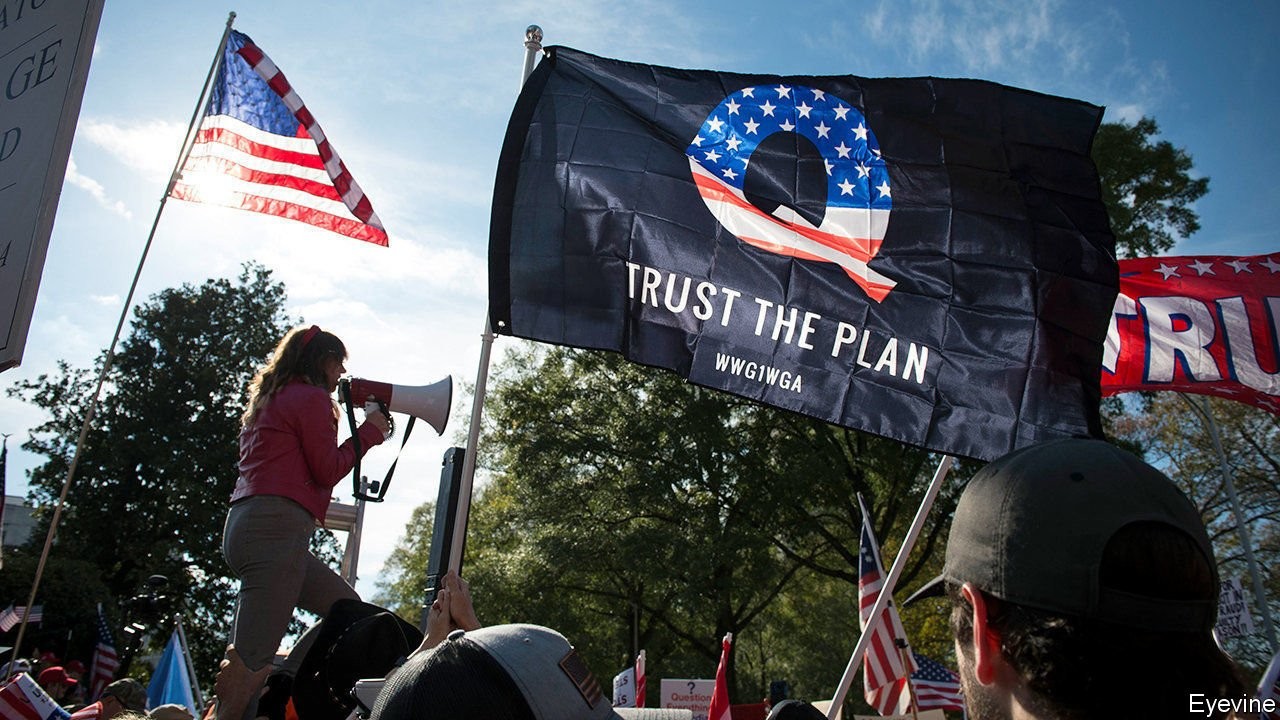 GINA BISIGNANO cut an unusual figure among the rioters on January 6th. Not many chose to storm the Capitol dressed in Chanel boots, a Louis Vuitton sweater and fashionable sunglasses. Yet the transition undergone by the owner of Gina’s Eyelashes and Skincare in Beverly Hills from citizen to insurrectionist is symbolic of the coalition responsible for the riot. According to a Beverly Hills Courier article, based on interviews with Ms Bisignano, before 2016 there was little notable about her political beliefs beyond a staunch opposition to abortion. Then she became increasingly concerned about paedophiles controlling the government. When the pandemic struck she began to attend weekly anti-lockdown rallies and grew vocal in her support of Donald Trump. When he encouraged people to come to Washington, DC to contest the certification of the presidential election he had lost, she tweeted back “I’ll be there”. Ms Bisigano’s conspiratorial thinking and diehard Trump support set the stage for her to act as a mouthpiece for the insurrectionist fantasies of the far right. When the building was breached, she raised her megaphone to urge “strong, angry patriots to help” those inside the building, declaring: “This is 1776.”

Ms Bisignano’s story may seem uniquely American—she did, after all, storm the American legislature with the encouragement of a defeated American president. But the far right’s strength has been growing globally, too. Between 2015 and 2020, according to a UN report, the number of far-right attacks around the world more than tripled. It has bolstered its ranks by recruiting from the supporters of right-wing populists and conspiracy theorists, aided recently by the disaffection caused by the pandemic and efforts to control it. On February 22nd the secretary-general of the UN, António Guterres, called white-supremacist terrorism “a grave and growing danger”. The path that led an ordinary businesswoman to try to overthrow her government is increasingly well-trodden around the world.

In the ten years since Anders Breivik meticulously planned and carried out the massacre of dozens of people in Norway, right-wing extremism has grown truly international. Local issues of concern are made to fit into transnational online narratives about the impending elimination of the white race. A pantheon of extremist “saints” responsible for atrocities has been canonised and their hagiographies and manifestos spread on platforms such as 8kun and Telegram to inspire similar acts. Far-right extremists, united by an ideology of white victimhood, travel internationally for music and mixed-martial-arts festivals, marches and training camps. Some even fought in the conflict between Russia and Ukraine, on both sides. As in America, the pandemic has energised them and exposed them to a new audience. So too has the storming of the Capitol.

To Americans, seeing the Confederate Battle Flag raised in the halls of the Capitol on January 6th provoked horror. To Germans, it must have seemed all too familiar. On August 29th hundreds of protesters attempted to storm the Reichstag. They were stopped at the threshold by police, but not before the Reichskriegsflagge, the battle flag of Imperial Germany, adopted by those on the right, from “traditionalists” to neo-Nazis, was seen flying in front of the home of post-war German democracy. Immediately after the US Capitol was invaded, German extremist chatter was full of calls to storm the Reichstag again.

In January Facebook and Twitter purged some extremist and conspiracy-theory accounts, while Parler, a Twitter clone used by the right, temporarily disappeared. This flooded the extremists’ corner of the internet with “refugees”, whom they were ironically happy to receive and hope to radicalise. The organisers’ outlook is global, with multi-lingual messages welcoming newcomers to “the resistance” and explaining how to use Telegram anonymously, with lists of extremist channels for various countries and languages.

Anti-lockdown protests will probably continue to help draw these groups together, unified by the bond of conspiratorial thinking. The group that tried to storm the German parliament in August had broken off from a larger anti-lockdown protest in which 38,000 people participated. They came from across Europe, waving anti-vaxx banners and flags with references to QAnon—a shape-shifting conspiracy theory centred on the notion that Mr Trump is defending America from cannibal paedophile elites. On January 8th protesters gathered in Wenceslas Square in Prague to decry lockdown measures. Though few in number, the range of views present was telling: anti-Roma and anti-Muslim activists stood with people waving Trump flags. A young man wore the skull mask of the Atomwaffen division, a neo-Nazi terrorist group with international ambitions, which believes that acts of extreme violence will “accelerate” the collapse of the current political order. Some protesters wore yellow stars of David with the word “unvaccinated” in Czech written on them.

Researchers spent much of 2020 warning that the economic hardships and governmental restrictions caused by the pandemic were creating an audience ready to listen to conspiracy theorists and far-right extremists. Both groups spent the year proselytising, online and at anti-lockdown protests, nursing feelings of grievance and offering tidy explanations of hardships and convenient scapegoats. The virus and its spread were blamed on Jews or Chinese people or immigrants, while the lockdowns were put in place by a globalist elite to further their designs. The far right especially deployed techniques that it had been honing for years, attracting the curious by stating popular views on issues such as immigration or child abuse and then equating them to their own views, making use of ironic memes to undercut concerns about how radical these views actually are. In Hungary, 45% of people believe that elites are encouraging immigration to weaken Europe, according to polling conducted by Yougov and Datapraxis on behalf of Hope not Hate, a charity that combats extremism. The distance between this and the “great replacement”, a right-wing conspiracy theory that claims that Jews are sending immigrants to Europe in droves to destroy the white race, is thin enough to be effectively exploited.

A similar process was apparent in the Capitol riot. Helped in no small part by Donald Trump and his boosters constantly pushing the limits of what his supporters consider an acceptable view, notably the notion of a “stolen” election, the boundaries between populism, conspiracist theories and far-right ideology became blurred. MAGA supporters mingled with white supremacists, anti-government zealots and adherents of QAnon, all drawn together by a conspiratorial mindset.

Other such coalitions have formed. Even before Mr Trump came to power, populist parties around the world had success exploiting the complaints, often in part legitimate yet misdirected, of those who felt ignored by politicians. When the pandemic struck, some parties such as Austria’s Freedom Party and Italy’s Northern League told their supporters that immigrants were to blame. As lockdowns wore on, populists encouraged protests against government policy. For some, such stoking of grievance hardened into a rejection of scientific and governmental authority, and a desire to find scapegoats to blame for the strictures imposed by the pandemic.

That created fertile ground for conspiracy to take root. QAnon’s rise is instructive. Once a fringe theory attractive primarily to Americans, during the pandemic it spread as far away as Japan, incorporating local concerns wherever it reached. Each country’s version tends to follow similar contours: a group of shadowy agents pulling the strings behind the scenes must be defeated (America’s deep state will be the first to go). Some around the world even believe that Mr Trump is leading a liberation campaign against a transnational deep state.

With Mr Trump relegated to Mar-a-Lago, and Q, the movement’s prophet, silent, calls to “trust the plan” seem empty. The faithful have two options: recognise the theory for the nonsense that it is and become apostates, or twist new events into an even more tortured and more extreme worldview. The “sovereign citizens”, a fringe anti-governmental movement, asserts that there has not been a legitimate president since 1871, when America ceased to be a country and became a corporation owned by the City of London. On March 4th (the constitutionally mandated inauguration date until 1933), this rightful system will be restored, they contend, and Donald Trump will be sworn in as the 19th president, picking up where Ulysses Grant left off. This may be a wild fantasy. But QAnon chatter about “executions” and “gallows” may be one reason the National Guard has been asked to remain in Washington until mid-March.