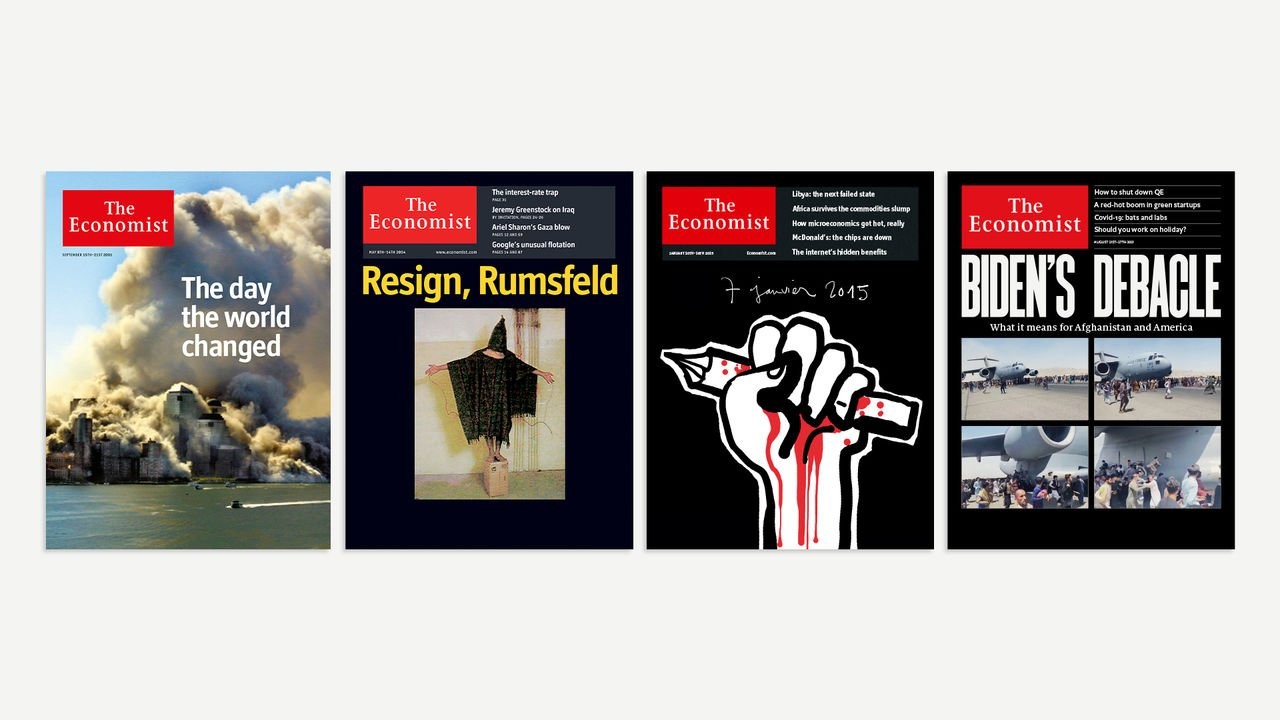 WILL ANYTHING ever be the same? In the days after 9/11, when all were stunned, it was clear the world had changed profoundly. Less obvious was just how far the geopolitical shockwaves would reach. In our first cover story after the assault we likened the moment to the attack on Pearl Harbour. Suspicion already pointed to Osama bin Laden and al-Qaeda. We called for America, and its allies, to offer up a response that was not timid, but that remained “measured”.

Two months after the attacks our focus was squarely on Afghanistan, where the American-led coalition had chased the Taliban from the larger cities, including Kabul, and al-Qaeda had fled to the border areas with Pakistan. In our cover story we wished for the Taliban to be in “total, not merely tactical, retreat”, hoped for the UN to help to bring stability, and called for any new rulers to shun bin Laden and his like.

A year on, global attention, led by America’s president, George W. Bush, had shifted to Iraq. Could America, and its allies, justify invasion even without UN agreement? The goal was to depose Saddam Hussein, a former-ally-turned-opponent, who was assumed to be developing weapons of mass destruction. In this issue (and later ones) we made a case in favour of the coming war.

The invasion of Iraq proved swift and overwhelming, but without a strong or popular government, sectarian clashes and terrorist attacks spread. As was soon obvious, much had gone wrong. Troubling for America and Britain, investigators found no sign of Saddam’s supposed weapons of mass destruction. Western intelligence, again, had proved badly off the mark. By late 2003 we asked if George W. Bush and Tony Blair had lied to justify war.

By 2004 gloom was mounting. Western countries struggled to find legal ways to confront extremist opponents who had been stirred up by events in Iraq and beyond. Images of abuse of suspects who were kept (almost always without trial) in American detention centres spread dismay. Pictures of ill-treated inmates stood “an awful chance of becoming iconic images that could haunt America for years”, we said.

Some Economist covers require weeks of work. This one was produced in hours, after suicide-bombers struck London’s buses and underground trains in July 2005. Extremists, many linked to al-Qaeda, carried out attacks against civilians in Madrid, Mumbai, Nairobi, Nice, Paris and other cities over the years. Public debate often focused on whether the West’s actions in the Middle East had provoked them.

Near the end of Mr Bush’s presidency, fatigue over wars in Iraq and Afghanistan was widespread. But how to leave without conceding humiliating defeat? One counterintuitive (and temporary) answer was a “surge” of extra American soldiers, sent into Iraq to try to impose order. “Democracies need the courage to withdraw from wars that bring no good,” we observed, “but also to persevere in just ones.” Nonetheless we admitted that victory would “at most mean preventing catastrophe.”

In May 2011 Barack Obama told the world how American special forces had found and killed Osama bin Laden in a safehouse in a military town in the heart of Pakistan. Al-Qaeda had been dealt a near-fatal blow. But its ideas and methods would re-emerge and spread among many successor groups.

Marking ten years since 9/11, there was much still to be troubled about. In launching his attacks, bin Laden had hoped to draw America into “bleeding wars” in Muslim lands. As we concluded, “in this he most cruelly succeeded.”

By 2014 it became clearer that a new Islamist terrorist group was a greater threat to the world than al-Qaeda. Islamic State appealed more to the disaffected within Western countries as it set about seizing territory in Iraq and elsewhere, all in the name of forming a “caliphate”.

Years of terror, violence and tension since 9/11 have challenged core elements of Western democracy. How secure could ordinary people feel? How robustly could freedom of speech be defended? In January 2015 extremists murdered cartoonists in Paris who had dared to sketch the Prophet Mohammed. Even bloodier terror attacks followed in Paris, Brussels and Nice.

Joe Biden vowed to get the last Americans home from Afghanistan, to end “forever wars”, and to do so before the 20th anniversary of the attacks. Yet the rapid collapse of the American-backed government in Kabul, and the swift return of the Taliban, marks a humiliating end to a difficult period. What role now for America in the world?