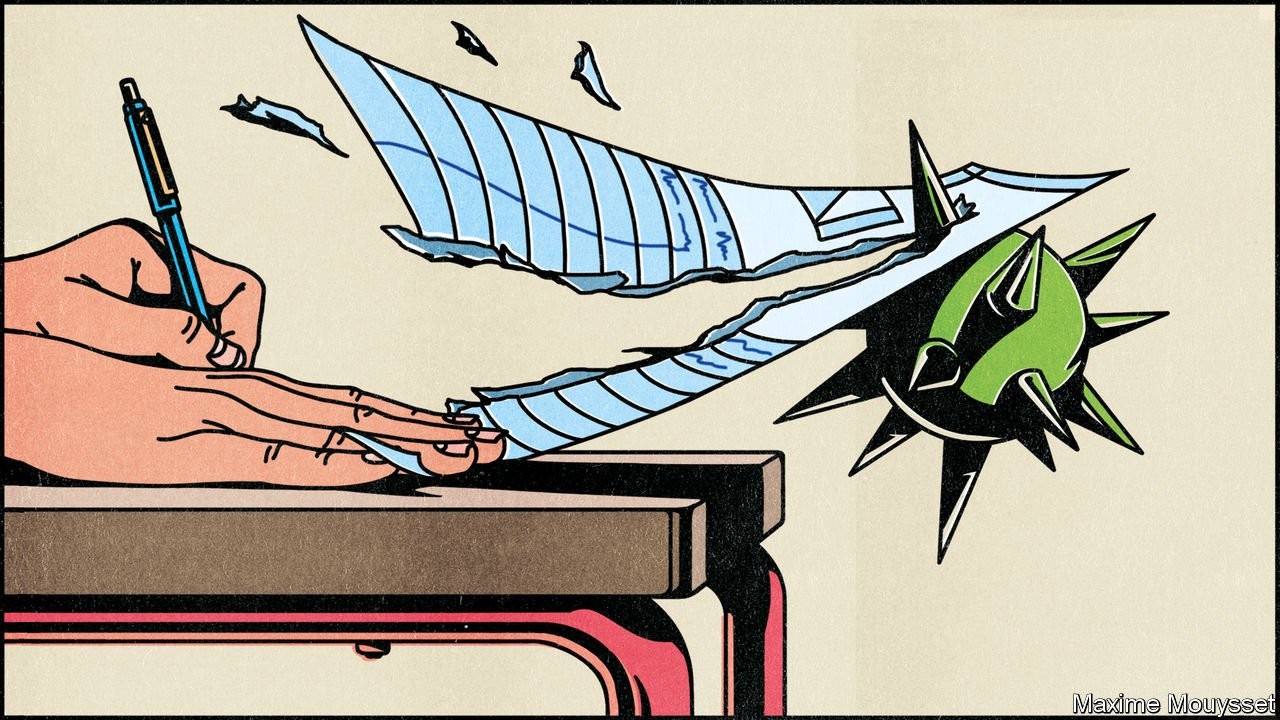 “MY BROTHER THINKS I’m crazy,” says Márcia Ramos, a 53-year-old from Rio de Janeiro. After losing a job in sales a few years ago, Ms Ramos decided to retrain as a lawyer. She and 6m others are now waiting to take the ENEM, an exam that many Brazilian universities use in their admissions process. The test should have taken place in November. Because of covid-19 it has been postponed until January.

The free test-prep class Ms Ramos attends, run by a youth group, has been less effective since it went online. So she is relieved to have more time to cram. The delay to the ENEM has, however, led universities to fill more of their spots for the coming academic year using their own entrance exams. This is bad news for poorer students such as Ms Ramos who have less time and money to study for several tests.

School closures have disrupted the education of close to 1.5bn pupils since the start of the year. Governments have been forced to make difficult decisions about whether and how to conduct important exams. These have revived long-running debates about the fairness of high-stakes tests. That could result in changes that last far beyond the pandemic.

Many countries have ploughed ahead with big exams. On December 3rd half a million youngsters will sit South Korea’s fearsome matriculation exam. Face-masks are mandatory. Papers will be brought to hospitals for any candidate needing treatment for covid-19. Pupils lost at least five weeks of face-to-face learning when the pandemic closed their classrooms; cram schools closed, too. But one 18-year-old from Seoul does not feel hard done by. When classes were forced online pupils “talked less and studied more”, she says.

In July some 10m people sat the gaokao, China’s school-leavers’ exam. The two-day test took place a month late; exam centres set aside quarantine spaces in case candidates developed symptoms while it was happening. Provincial governments in Germany also agreed that their school-leavers’ exams should go ahead, though they account for only a small portion of students’ final grades. Spain suffered one of Europe’s worst outbreaks and imposed one of its strictest lockdowns. Its university-entrance exam still went ahead, though it covered less material than usual.

Some countries allowed exams to go ahead but with alterations. Italy called off written tests for school-leavers, but allowed an oral examination to proceed. Austria and Hungary did the opposite. In America Advanced Placement exams—optional courses that some teenagers take to impress university admissions offices—went online. The papers were shortened to 45 minutes and covered only material candidates were likely to have studied before they were booted out of their classrooms.

Andreas Schleicher, head of education at the OECD, a club of mostly rich countries, thinks more countries could have held exams safely: “You don’t want people to talk; you don’t need them to move around; their desks are quite far apart.” So far it appears that the grades of most pupils who did sit exams this year have been no worse than usual, according to UK NARIC, a British government agency that keeps track of qualifications in other countries. Candidates in Germany performed a little better.

Some countries, including Britain, France and Ireland, cancelled exams. That had least impact in places where pupils rack up marks before any final tests. Other governments asked teachers to help decide students’ grades. These were higher than usual, according to data collected by UK NARIC (see chart). To produce results comparable to the previous year’s, Irish moderators would have had to lower 60% of the grades teachers had suggested for final-year students registered to sit the most difficult papers. They let all but a fifth stand. In France 96% of pupils earned a school-leaver’s certificate, up from 88% in 2019.

Authorities in England were harsher. They lowered 40% of the grades teachers had proposed for A-levels (exams taken at 18). Outrage ensued. Critics pointed out that the approach moderators had taken risked hurting some children from low-achieving schools. The government eventually agreed that the teacher-suggested grades would stand; as a result the share of entries receiving one of the two highest marks has risen from about one-quarter in 2019 to more than one-third this year. Mary Richardson of University College London says the government was “foolish” to think it could “normalise a completely abnormal situation”. Mr Schleicher from the OECD thinks that by both cancelling exams and abandoning all moderation England ended up with “the worst of all worlds”.

The muddle has revived long-running debates about the value of exams. A few days or hours of testing is a crude way to assess students’ performance in courses that have lasted a year or more. Exams disadvantage clever pupils who deal badly with pressure. Relying on them too much can lead to narrow curricula which include only things that can be tested affordably. Time spent teaching youngsters strategies to maximise their exam scores could otherwise be spent learning more useful stuff.

Some psychologists worry that the pressure of exams is raising the risk that vulnerable youngsters will develop mental-health problems, early signs of which often appear during adolescence and early adulthood. Exams can also label children as failures, when they had no choice but to attend bad schools. And rich parents often pay for tutoring to boost their offspring’s chances.

Yet abandoning exams creates new problems. Continuous assessment means pupils may simply “learn stuff, get a grade and then forget it”, says Dylan William, a British expert in educational assessment. Coursework can encourage students to tinker endlessly with just a few pieces of work. Junking exams only introduces new kinds of stress if the alternative is that all schoolwork counts towards final grades. Without objective assessments, learners from poor homes are more likely to be judged on their backgrounds than on their actual achievements.

Teachers sometimes show bias when marking pupils’ work. A study of 11-year-olds in England compared the grades teachers awarded with scores the same pupils achieved in tests marked blindly. It found that teachers were more likely to give black pupils lower marks than they deserved. According to research published in 2019, some teachers in New York state gave worse marks to essays when they were led to believe the author was fat. Wealthy parents are more likely than poor ones to put pressure on teachers to boost their children’s scores. Worries about corruption help explain why exams remain so crucial to education in China and South Korea.

Teachers in Britain tend to under-predict how well clever pupils from poorer backgrounds will perform in exams. In Wales, where results this year were based on teachers’ predictions, grades rose across the board, but the difference between the number of rich and poor children receiving the highest marks was wider than usual in several subjects, notes Rhian Barrance at the University of Cardiff.

Some countries had begun making changes before the pandemic hit. Reforms in France mean that from this year school-leavers are supposed to enter their final exams with 40% of their marks already in the bag; previously everything depended on the tests. A few years ago England moved in the opposite direction by abandoning coursework and reprioritising end-of-course exams. In 2019 an admissions scandal forced South Korea’s government to say it would review a programme that seeks to make exam scores less critical to university applications. Chinese officials talk endlessly about shaking up the gaokao, but have only tinkered with it.

The pandemic may amplify calls to get rid of exams that some already thought unnecessary. Universities in America traditionally ask applicants to sit the SAT or ACT, tests which are not required by the public school system. This year many universities waived that requirement after many exam sittings were cancelled. This delighted critics of testing, who say the exams advantage richer applicants who can pay for test-prep. About 70% of American universities offering four-year courses now operate “test-optional” admissions policies, up from around 45% before the pandemic.

In England the pandemic has raised fresh questions about the future of GCSEs, a flurry of exams taken by 16-year-olds. These have become less crucial as a result of reforms that require teenagers to stay in some kind of education or training until they are 18. Developing countries have been gradually junking exams they have traditionally used to decide which children may enter secondary school. This year’s crisis could speed that up.

But the disruptions of 2020 have made clear that exams are useful. Some teachers’ unions in France argue that inflated grades of the sort handed out this summer risk becoming a permanent fixture as a result of the government’s efforts to de-emphasise exams. Teachers in England did not enjoy helping decide who should pass or fail, says Lee Elliot Major, a professor of social mobility at Exeter University. Many will be pleased when external examiners relieve them of that burden.

How exams should proceed next year remains a pressing question. Many countries that closed schools during the early months of the pandemic have managed to keep them open during later lockdowns. But lots of children are still having to return to stints of remote learning when there are suspicions of infections among their peers. In October secondary-school attendance rates ranged from a little over 60% in some areas of England to more than 90% in others. They are lowest in places that already had lots of poor children. In mid-November education authorities in Wales cancelled school-leavers’ exams set for next spring. Politicians said it would be unfair to require youngsters to sit a common exam, given that the pandemic has affected them in different ways.

Sandra Milligan of Melbourne University thinks officials in the Australian state of Victoria have found “the disaster” in England helpful in working out “what not to do” with their own tests. Final exams are going ahead there, even though pupils have endured long lockdowns. Those who score unusually poorly may have their grades raised using a system similar to one that has long benefited candidates who suffer illness or trauma. Ms Milligan would like to see examinations become less central to Victoria’s school system, but opposed those who saw this year’s crisis as an opportunity to rush out changes. Half-cocked school reforms risk hurting those “who can least look after themselves”. ■

This article appeared in the International section of the print edition under the headline “Testing, testing”