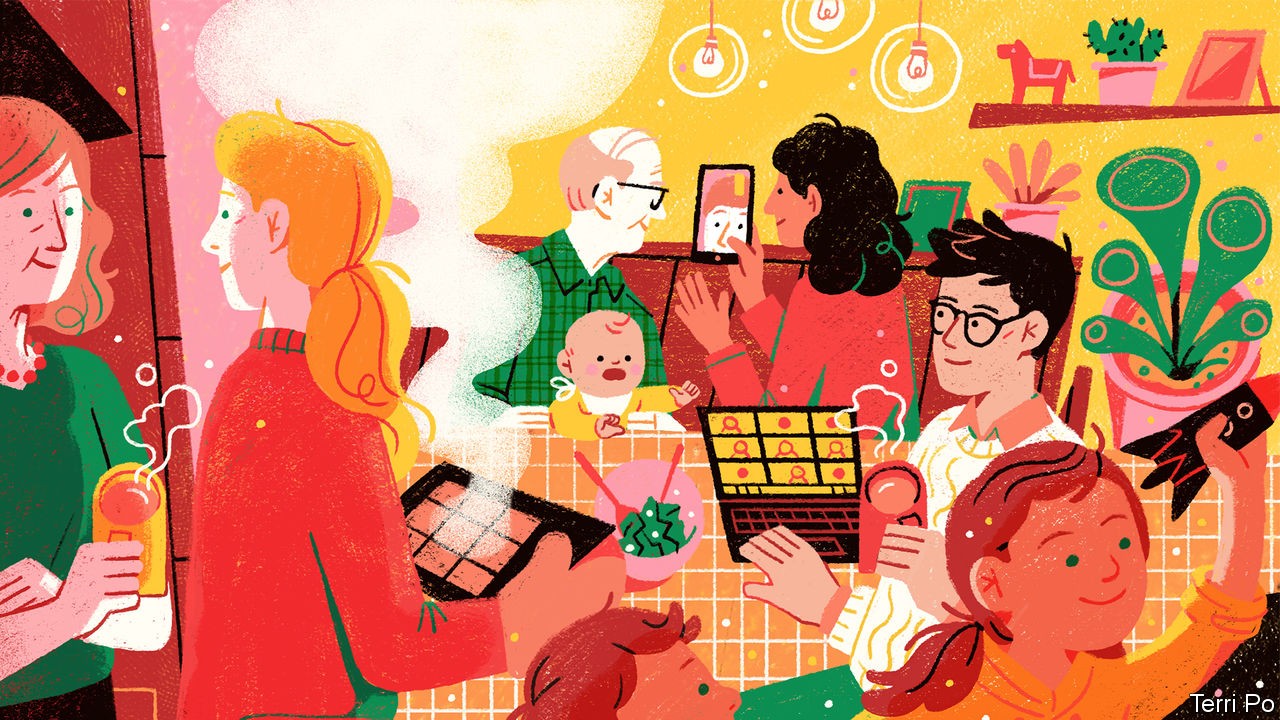 Editor’s note: Some of our covid-19 coverage is free for readers of The Economist Today, our daily newsletter. For more stories and our pandemic tracker, see our hub

IN MARCH, WHEN Britain went into lockdown for the first time, Andrew Davidson, a 69-year-old retiree who lives alone, was in the middle of renovating his house in the small town of Leamington Spa. The kitchen was a building site so he accepted an offer from his sister to move in with her and her husband in Birmingham for a couple of weeks. Before leaving he asked the builder to put in temporary kitchen surfaces so he could move back in if they couldn’t stand living together. Mr Davidson ended up staying away for nine weeks. It was “absolutely brilliant”, he says.

In the mornings he would go for a walk with his sister or brother-in-law, or they would do gardening. In the afternoons they retreated to their own spaces to work on their own hobbies: German lessons via Zoom, Spanish study, and textile printing. They ate dinner together, sharing cooking and all-important baking duties. “Living together was a bit of a revelation,” says Mr Davidson. “I was quite sorry to move out.” He says after his experience he would consider moving in with other people on a permanent basis in the future.

As lockdowns have limited socialising beyond cohabitants or small groups known as “pods” or “bubbles”, stories abound of people moving in with others to lessen isolation or share housework. In fact, the pandemic may merely have accelerated an existing trend. More and more, people in the rich world are once again choosing to live together.

In Britain households where couples share with at least one other adult were the fastest-growing type in the two decades to 2019. In Canada 6% of the population lived in multigenerational households by 2016, and it was the fastest-growing type of living. By the same year a fifth of Australia’s 24.5m people were living with others from outside their immediate family, a 42% increase on 15 years earlier.

Such enthusiasm runs counter to Western notions of individual freedom and privacy. Fights with family or flatmates are the stuff of common lore. But it is single-family households that are the outlier in the broad sweep of human history. From hunter-gatherers to workhouses, people lived in big groups, often including non-relatives, pooling resources such as food and sharing tasks such as cooking and child care. It is only after industrialisation, when work moved outside the home, that people in the Western world started to live in nuclear families.

In much of the world living in bigger family groups never stopped. Almost two thirds of households are extended family ones in Senegal, for example. Extended families provide a safety net where the state does not, pooling cash to pay medical bills and letting jobless nephews eat from the communal pot. Even in the West, the perception that the two-adults-two-kids family is the norm is outdated. In America the share of households made up of married couples with children halved between 1970 and 2019. People are marrying less and later. Marriages are less likely than they were to last until death.

Yet the splitting of the nuclear family has taken its time to create an explosion of new household types. Instead, much of the West has seen a dramatic rise in single-person households. From France to Japan, they make up over a third of the total number. In Germany they account for 40% of the total, in Finland 41%. Communal living, at least beyond student halls, retirement villages or monasteries, is “often seen negatively or as a cult”, says Irene Pereyra, a designer who is running a project on communal living with IKEA, a Swedish furniture firm.

Indeed, that is the appeal to some people. David and Kim Gotterson, an Australian couple in their 60s who lived for many years in communes, said they were rebelling against the materialistic society of their post-war-generation parents. “We wanted a pure, more natural way to live,” says Mr Gotterson. Environmentalists note that sharing homes is friendlier on the environment than having separate ones. Since the 1970s some feminists have emphasised the benefits for women of living with other women.

Although some choose to share out of belief, recent interest in shared housing has been sparked in large part by economic pressure. In Britain, where NIMBYism makes it extremely difficult to build new homes, the average house costs more than eight times the average salary, up from four times in the mid-1990s. Homes are less affordable for single women, who earn less than men. The number of older divorcees who live alone has gone up. In the absence of new construction, this squeezes the supply for younger people, who are less wealthy. “As more people lose their jobs [because of the pandemic] or have their pay or their hours cut, sharing a household with more people is a way to pay the bills,” says Bella DePaulo of the University of California, Santa Barbara, the author of “How We Live Now”.

Companies have jumped on this opportunity. The Collective, a British outfit, runs three co-living buildings, one in New York and two in London. Its “members”, whose average tenancy is nine months, live in studio flats but share lounges, gyms and a roster of events from cocktail-mixing to running clubs. The firm has another 9,000 units in development.

Although urban buildings run by the likes of The Collective are aimed mainly at young, single professionals, the types of people seeking to live this way are growing more diverse. The Collective houses people aged 18 to 67 years old (the average is 30). A survey by Build Asset Management, a British firm that runs serviced accommodation, said that in the year to June 2020 it saw a 136% rise in inquiries about shared rental accommodation from couples. Kin, an American company, last year opened two buildings in New York designed for families rather than singles or couples. Would-be residents can choose an apartment with up to four bedrooms and access to communal facilities and services, including a play area and nannies.

The most experimental housing today involves multiple generations of unrelated people who did not get a say on whom they lived with. Perhaps unsurprisingly it is found in Scandinavia. Some 60% of the residents of the 51 apartments in Sällbo, a public-housing project in the Swedish town of Helsingborg, are over 70. The other 40% are young people, half of them refugees. Residents must pass an interview to get into the community, and sign a contract to spend two hours per week socialising with neighbours. This could mean sitting in a shared lounge reading a book or doing shopping for one of the older members. The project is to run for two years. If it is judged successful, tenants will be given permanent homes.

Crossing multigenerational boundaries has social benefits, says Dragana Curovic, the manager. The young, especially the newcomers, learn from the older people, who in turn appreciate the young people’s help with practical things, she says. Isolation is unhealthy. One metastudy reported that people without strong social connections have a 50% higher chance of dying early—equivalent to smoking 15 cigarettes a day. A Swedish study of people over 75 years old found those with a variety of happy connections with friends and family had a lower risk of dementia.

Many other aspects of life can benefit from communal housing, too. Parents of small children find it easier to go out to work if they can leave their offspring at home with other friendly adults. Chloe and Alex Wolff, a couple in their 30s, and their baby son moved in with Alex’s parents for seven months from March to September. Ms Wolff says she would not have been able to go back to work six months after giving birth, had she not been living with her in-laws. At that point all the nearby nurseries were shut because of covid-19.

Ben Brock-Johnson, a 40-year-old journalist, moved from New York to live in Pioneer Valley, a community of 32 homes in rural Massachusetts, with his wife and their now five-year-old twins. The community has shared gardens, as well as a large communal dining area and an events space. He says it is “like having 100 parents for your kids”. There are people around—including his parents, who live on the same estate—who can play with them, baby-sit them and just generally look out for them. His family, he reckons, have a much better work-life balance for it.

The disadvantages of sharing can be mitigated by design. Grace Kim, a Seattle-based architect who lives with eight other families in a building designed by her and her husband, says her development balances community and privacy—most people’s concern about living communally. “You can see into some people’s kitchens but not their living rooms,” she says.

Decision-making can be slow. You have to work with neighbours even if you do not like them. You cannot simply ignore them. However, as in the workplace, people who have to get things done together often put aside their differences and get on with the job. Communal living might, conceivably, help bring divided societies together, at least a little.

Few governments promote it, though. Landlords in Britain need a special licence to let single homes to multiple families. In New York individually rented apartments with shared bathrooms are banned (to discourage brothels). During the pandemic governments have warned of the dangers of big households: sociable youngsters may bring the virus home to their grandparents. Multigenerational living may partly explain why ethnic minorities have been so hard-hit by covid-19 in Britain.

Proponents of communal living say it has made lockdowns more bearable. Ms Kim’s community stopped having 40-person communal meals. Instead, it set up pods of two to three families who could dine in well-ventilated shared spaces. In Sällbo, younger residents have gone out to shop for older ones who are shielding, says Ms Curovic. Lisa Feardon, a doctor who worked long, arduous shifts, says returning to her home at The Collective in London was “a lifesaver”. In a normal rented flat she would have “just come home and collapsed doing nothing,” she says. “But as everything is under one roof here I was able to still have some sort of work-life balance.”

Mr Davidson, whose house is now renovated, says while the pandemic continues he will be staying at his sister’s a couple of nights each week (in a support bubble). The pandemic has forced people apart. But for an increasing number, communal living offers a way to stay connected. ■